Automated Guided Vehicles (AGVs) are not just for delivery and logistics applications. They’re playing an increasing role as main assembly line conveyances. A key enabling technology permitting AGVs to perform in the heavy duty world of production line manufacturing is Inductive Power Transfer (IPT®), also known as wireless power. This enables AGVs to abandon the battery and operate continuously without need for recharging or risk of down time due to dead batteries.

AGVs have long been used for delivery and material handling in logistics and warehouse applications, where the classic battery powered AGV is ideally suited to operate. An overnight charge is usually sufficient to permit operations through the entire work day, and there frequently are enough stopping points (and times) to permit opportunity charging. However the higher duty cycle demands in production and continuous assembly line operations do not easily permit opportunity charging. Battery operated AGVs have often failed to perform especially in 2 and 3 shift operations. The main limiting factor is the energy storage capability of the AGV battery.

Sure, the AGVs could have bigger batteries, but that adds cost and weight to each AGV, and they still need to be charged. That requires available ‘dead time’ for the AGVs to be parked for charging. Another solution is to add additional AGVs to the system and always have some offline in a charging station, but that is an extra cost too. Assembly line AGVs tend to be larger and more expensive than delivery AGVs, with additional features such as tooling plates, lifts and fixtures. Getting battery operated AGVs to operate through a two shift production cycle can be a challenge. Getting them to operate continuously through 3 shifts is not practical. However, by eliminating the battery, the AGV is freed from its energy constraint. Wireless power supply permits the AGVs to operate continuously, without ever needing to stop for a charge, just as if they were ‘plugged in’, but without the plug.

Wireless data communication for machine control has proven to be robust and stabile in even the most demanding manufacturing environments, including automotive. Wireless data is not only being used for monitoring and data acquisition, but also for machine control and safety monitoring, with multiple devices that are rated to transmit safety signals via wireless and meet safety and security standards. However, wireless power supply enables the ‘cord’ to be cut completely so the AGV can operate automatically and indefinitely.

One advantage of logistics AGVs is their ability to free roam over large distances in a warehouse or on a factory floor. Their travel paths are flexible. There are typically a small number of AGVs covering relatively large distances, delivering material from one location to another. On-board energy storage in the form of a battery is ideal for this application. Production or assembly line AGVs, on the other hand tend to have much more clearly defined paths since they need to interface with tooling or defined workstations and also frequently engage with other conveyors such as overhead EMS or power-and-free.

There are also typically a larger number of AGVs on assembly lines, and the routes tend to be shorter. So, there is a higher density of AGVs on the assembly line, and they are always on the go. These distinct characteristics of assembly line AGVs place unique demands on the power supply system for the conveyance, which wireless power is able to fulfill.

AGVs offer a number of advantages as an assembly line conveyance compared to more traditional such as chain based conveyances. Some of the key features are: 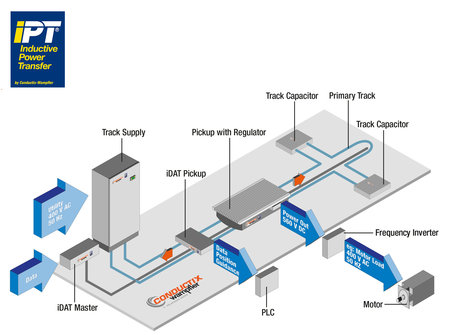 Electric Power is the rate of Energy consumption per unit time (E=P*t). Power consumption of 1 kilowatt for one hour is equivalent to 1 kilowatt-hour (kWh) of Energy consumption. The main challenge for AGV batteries is typically Energy, not Power. Is there enough energy in the batteries to keep the AGV running all day, rather than is the battery powerful enough to handle the heaviest load? When the batteries are eliminated from the AGV, and it is powered wirelessly from the floor, then the primary focus becomes Power. For example, what is the peak power required to accelerate my fully loaded AGV, and is my inductive power pickup sized appropriately? For the battery operated AGV the focus is to provide the AGV with sufficient Energy to sustain the average power consumption over the required number of operating hours. When designing battery-free AGVs, the focus is on providing the AGV with sufficient peak power capability to handle the heaviest load at the highest speed.

Inductive Power Transfer (IPT®) technology has been commercially available since the 1990’s. It is capable of transferring power in the kW range. The basic principle is the same form of electromagnetic induction used by conventional transformers. However, in this case instead of tightly wound (and closely coupled) coils on a shared magnetic core, the primary and secondary windings are separate and may move with respect to one another. Nonetheless, an alternating current in the primary conductor induces an alternating current in the secondary with which it is (albeit loosely) coupled by magnetic field. In order to make this process practical, the operating frequency is increased to 20 kHz. This reduces the size of the components since the energy density is increased in proportion to the frequency, in the same way that aircraft use 400 Hz frequency in order to reduce the size (and weight) of their electrical equipment. In addition, IPT uses tuned resonant coils in order to improve the coupling.

Contrary to popular hearsay, loosely coupled inductive power systems are more efficient that battery-powered systems. The efficiency of the inductive coupling between primary and secondary in an IPT® system is in the order of 96%. This is much better than batteries, which are typically only able to return 80% of the charging energy applied.

Chain conveyors have been around for over a century. The first conveyor systems used in the mass production of automobiles were chain conveyors. It is unlikely that chain conveyors will completely disappear from automotive manufacturing any time soon.
Battery powered AGVS have been used for many years, however primarily in material handling rather than as assembly line conveyances. Battery induced limitations (battery life, charging, disposal, required infrastructure) make then less attractive for assembly line applications.

Battery-free AGVs, powered and controlled completely wirelessly have the ability to operate indefinitely, sustainably, with minimal maintenance, and lower risk of down time. This coupled with the inherent system flexibility, and reduced cost and risk at installation means that they have found acceptance as assembly line conveyances, even in the most critical of all automotive applications, the marriage (of body and chassis).
Battery-free AGVs have established their place among assembly line conveyances providing a good return on investment (ROI) with low total cost of ownership (TCO).

We would like to thank RedViking for providing a great deal of the background information and application photographs for this article.

Back to news overview

vCard
QR-Code
How to find us