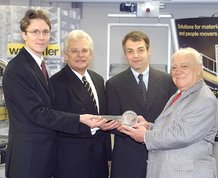 Weil am Rhein/Märkt, 28 November 2003. Wampfler AG, which has sales of about 70 million Euro and a workforce of over 450 and is one of the globally leading manufacturers of flexible energy and data transmission systems, is under new ownership. With this move, the company's founder, 75-year-old Manfred Wampfler, has passed the baton to the next generation of entrepreneurs. He himself remains a major shareholder, with 25 percent of the capital.

The new majority shareholder of the company will be a management team under the board chairman Stefan Ziegler, who will become the biggest single shareholder in the company. Together with the director of production and technology, Uwe Bormann, and the designated financial director, Christopher Friedrich, Mr. Ziegler will hold over 50 percent of the share capital. Other shareholders will be domestic and foreign managers of the Group. The new ownership structure will come into effect on 1 January 2004.

The chairman of the supervisory board, Peter Engel, praised the MBO model as creating a "solid basis for a successful corporate development over the coming decades." He thanked the company founder for demonstrating this "high measure of responsibility and consideration." Engel went on to say "Manfred Wampfler has chosen the management solution with long standing companions, although there was a financially more attractive offer from a foreign competitor." Moreover, he has agreed to a solution that will spread the financial burden of the new owners over an extended period of time.

Similarly, the supervisory board chairman praised in a press interview the "courageous step" of the new owners from "employee to entrepreneur." In an era where many are hesitant about taking risks, this is not something that goes with-out saying. There were also words of appreciation for the banks: contrary to opinions that have been expressed frequently, the banks as financiers of medium-sized businesses have not abandoned Wampfler AG. The Sparkasse and the Dresdner Bank at Weil am Rhein as well as the Landesbank Baden Württemberg are providing the management buyout with the necessary financial back-up.

In the view of the board chairman Stefan Ziegler, the company has "superb products and solutions, committed employees and hence excellent potential for further strengthening its leading market position." Together with Uwe Bormann and Christopher Friedrich, he expects from the participation of other senior management staff "an additional surge of motivation" for even better results. In the current business year, 2003, the Wampfler Group will exceed the sales of the prior year (65.4 million euro) and turn in a positive result. For 2004 the company, which besides its Weil am Rhein location has companies in nine further countries, has budgeted a further noticeable increase in turnover and result. It is expected that the technical innovation IPT (Inductive Power Transfer) – a worldwide patented system of contactless power transmission, in which some 6 million euro has been invested in re-cent years, will contribute to this growth. In Genoa and Turin, more than 25 local transport buses are already in operation using this Wampfler technology.